This vegan mac and cheese recipe is the perfect dish for your next dinner party. The creamy, cheesy sauce will have all of your friends coming back for more and leaving no allergic reactions in their wake! 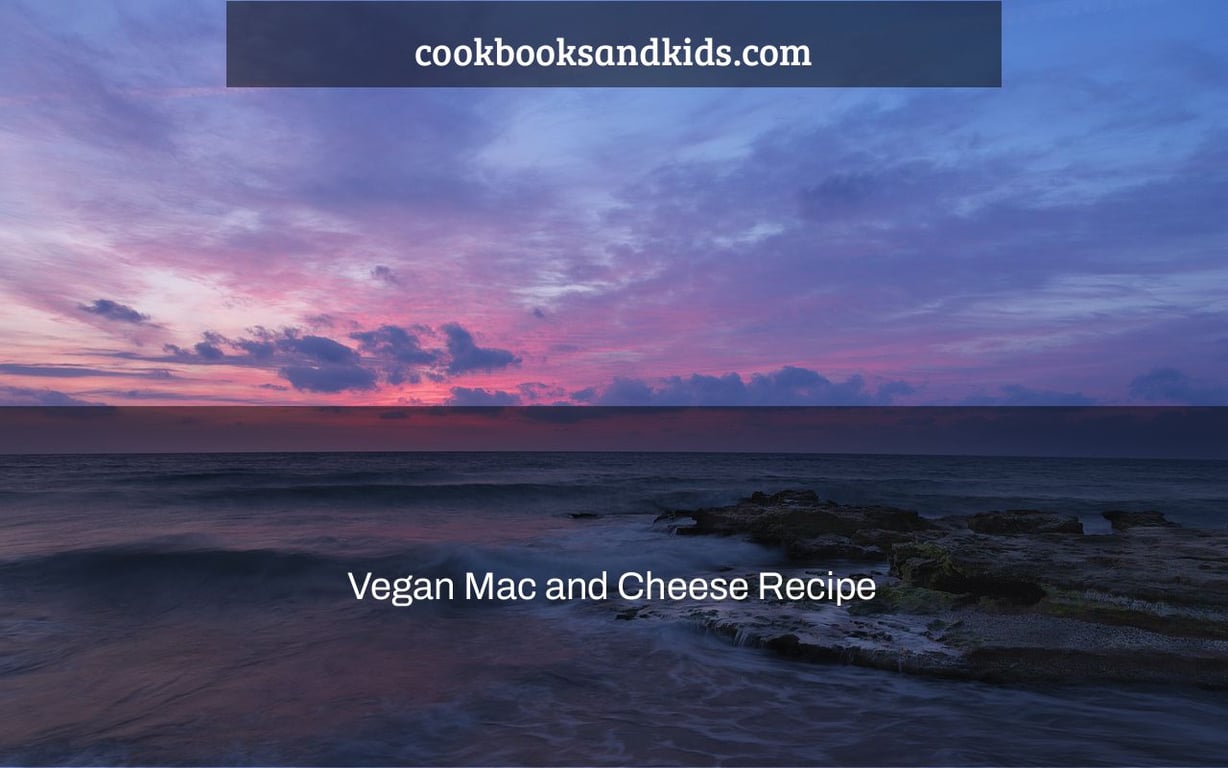 This quick vegan mac and cheese is excellent whether you follow a vegan diet or are just looking for some meat and dairy-free meal alternatives to add to your weekly dinners. Nutritional yeast (or a vegan cheese alternative, if you want) adds a savory, cheesy taste, while cashews provide a delightful creamy texture.

Vegan macaroni and cheese is equally as fulfilling as traditional mac and cheese in every mouthful. What’s the greatest part? It’s quite simple to create, taking just around 5 minutes! When compared to normal mac and cheese, it takes a lot less work and time, and it tastes just as good. Please sign us up!

Ingredients for Vegan Macaroni and Cheese

You’ll need a few items to prepare vegan mac and cheese sauce, most of which you probably already have on hand.

The sauce’s richness comes from cashews or macadamia nuts, as well as margarine.

The carrot thickens the sauce, while nutritional yeast adds a cheesy taste.

Add a little of salt, nutmeg, and onion powder for added flavor.

A teaspoon of vinegar gives a tangy note that helps to balance the taste.

For your vegan mac and cheese, any variety of pasta that can catch the sauce will suffice. Macaroni, shells, rigatoni, or penne are all good options. If you’re not in the mood for spaghetti, there are plenty of other options. Cooked vegetables, rice, or quinoa may be substituted.

While the vegan “cheese” sauce takes almost no time to create, you’ll want to set aside a couple of hours for the first step. To begin, soak the nuts for at least 2 hours and up to overnight in a dish. Pour out the water once they’ve soaked. In a blender, combine the nuts, carrot, yeast, vinegar, water, margarine, salt, onion powder, and nutmeg until smooth.

Pour the sauce into a saucepan and bring to a boil, stirring periodically. Now is the moment to add vegan cheese if you’re using it. Heat the sauce until the vegan cheese has melted, stirring constantly. Enjoy your vegan cheese sauce served over pasta!

Absolutely! If you don’t want to use nutritional yeast, replace it with a vegan cheese replacement.

How to Make the Best Vegan Macaroni and Cheese

Beans may be used as a replacement for nuts if you are allergic to them.

This recipe may be made using either white vinegar or apple cider vinegar.

Cayenne pepper, paprika, black pepper, white pepper, spicy sauce, or garlic may be added to your vegan mac and cheese for added taste.

Use gluten-free pasta to create gluten-free vegan mac and cheese. You may also omit the pasta and serve the vegan cheese sauce over roasted or steamed vegetables or rice instead.

Thin down your sauce with a bit plant-based milk if it’s too thick. Nut milk, soy milk, rice milk, and oat milk are all acceptable options.

You may use whatever veggies you choose in this dish. Sweet potatoes, broccoli, cauliflower, eggplant, zucchini, and bell peppers all work well as side dishes.

Try baking your vegan mac & cheese for a more flavorful result. Prepare the sauce and boil the pasta until it is al dente. Bake for 20 minutes at 350 degrees F, or until bubbling and gently browned on top.

Serve your vegan mac and cheese with roasted or steamed veggies, cauliflower steak, stir-fried broccoli, homemade garlic bread, roasted peppers, or a side salad, among other vegan side dishes.

How to Keep Vegan Macaroni and Cheese Fresh

Allow it cool slightly before transferring to an airtight container and storing in the refrigerator for up to 5 days.

Soak the nuts in a basin of water for at least 2 hours and up to overnight, then drain.

Fill a kettle halfway with water and bring to a boil. If you’re using vegan cheese, whisk it into the sauce until it melts.

Serve over spaghetti and have pleasure with it.

You may omit the margarine or oil if preferred.

What is vegan mac and cheese made of?

What is vegan cheese sauce made of?

A: Vegan cheese sauce is made up of any number of vegan milks and nondairy cheeses. It can consist of soy, almond, cashew or hemp milk as well as a variety in the types of plain dairy-free cheeses like nutritional yeast which can vary from mild to sharp.

A: No, Velveeta is not vegan because it has a milk protein in the product.